In humility, God does great things.

This summer in Honduras was beyond what I was even expecting. Throughout the summer God worked on my heart and definitely put me in uncomfortable circumstances to humble me but to also make His name greater. I honestly went down to Honduras thinking that nothing new or different was going to happen compared to the previous year. However, I was very very wrong. In this blog I just want to highlight an area where God worked on my heart during the summer. 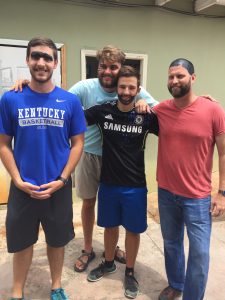 During my third week, I decided to step out of my comfort zone and ask God to use me in some way at the homeless ministry. I was still extremely uncomfortably but I got to share the Gospel that day with some of the homeless that had come to hear us (and eat some sandwiches). God really opened my eyes that day to how selfish I had been being. It was all about me up until that point during homeless ministry. I thought they were too dirty for ME. I thought they were too sinful for ME. But then it hit me, that’s exactly how Christ should have looked at me, but He didn’t! Christ looked past my dirtiness and all of my sins and loved me anyways. After coming to this realization, God changed my entire perspective on not just the homeless ministry but of every aspect of serving and sharing Christ’s love.

After that point, homeless ministry seemed to get better and better each week. Each week I would get to talk to some new faces but also started to build relationships with those that were there week after week. One of the last weeks of the summer at the homeless ministry, Ross got to speak about the woman at the well where Jesus spent time with a sinful Samaritan woman. While Ross was still talking, a homeless man came up who was clearly intoxicated. Throughout the rest of Ross telling the story, the man continued to talk loudly and was a distraction. Once the service was over we had 5-6 of our people that started talking with and praying with this man who was still being pretty crazy. I was over with a few other homeless guys when one of them asked me “Why are you guys spending time with a guy like him and guys like us?” I then got to tell those guys that it was because Christ would have spent time with them. It was the exact picture of the story of the woman at the well that Ross had just told. It was so cool to see Christ use us that day to be a picture of Christ to all of those guys. I have no doubt that they saw the love of Christ in us that day because we were spending time with them and loving them just like Christ did with the woman at the well.

I am so thankful for the opportunity I had to serve alongside Sparrow Missions this past summer. Christ worked in so many awesome ways that I would never have been able to imagine. Please keep the homeless community of San Pedro Sula in your prayers as there are still huge needs for the Gospel in that area.

I have made you a light for the Gentiles,
that you may bring salvation to the ends of the earth. Acts 13:47